The second half of 2021 witnessed a new energy crisis which led to skyrocketing electricity, oil and gas prices. For geothermal the story was different. Geothermal heating, cooling and power plants continued to provide baseload energy at competitive prices. In the midst of this, and potential military conflict and weeks after COP26 the European Commission proposed to increase the market share of imported fossils.

The International Energy Agency (IEA) published a cost survey of fossil and renewable heating in December (See Figure 1). It found that geothermal was not only cheaper than fossil heating but it was also more cost-effective than other renewable solutions on a life-cycle basis. The industry and policy makers must combine efforts to mainstream geothermal.

The problem is that the chief EU policy maker – the European Commission – has started off in the wrong direction. Instead of further integrating renewables in the energy system, especially in heating and cooling markets, much of the summer and winter “fit for 55” legislative package sought to protect, and in some instances, increase the market share of incumbent fossil gas. For example:

· In the Energy Performance of Buildings Directive (EPBD), financial incentives to install fossil boilers remain intact even though the legislation’s objective is to decarbonise the EU’s building stock by 2050. Proposing that all new buildings must be zero-emission by 2030 is less effective if fossil fuel subsidies are to continue in EU law, even after the successes achieved in COP 26.

· The gas ‘decarbonisation’ package was also launched alongside the EPBD. This creates a framework to promote hydrogen, grow gas markets in power and heating as well reducing methane emissions. The recast of the EU Regulation on the internal markets for renewable and natural gases and for hydrogen, an EU Directive on common rules for the internal markets in renewable and natural gases and in hydrogen, and the EU Methane Regulation. These proposals do not effectively address the issue of the lack of competition in the heat market. Instead of promoting an EU framework that would facilitate cost-effective, resilient local and decentralised production of renewable energy solutions, the Commission proposes to greenwash the gas markets. 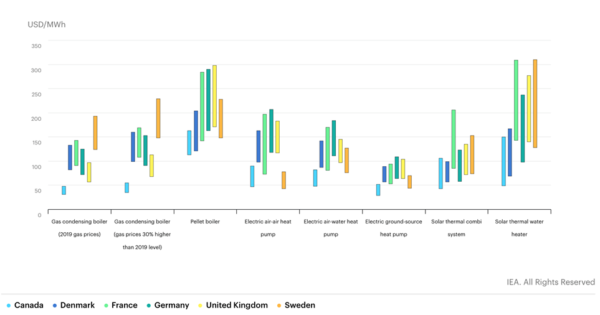 · On 15th of December 2021, the revised Trans-European Networks for Energy (TEN-E) rules for cross-border energy infrastructure were adopted excluding District Heating infrastructures. Although the European Parliament was proposing to include DH, the European Commission refused. Surprisingly or not, smart gas grids are eligible to TEN-E!

· On 21st December 2021, the Commission endorsed the new Guidelines on State aid for Climate, Environmental protection and Energy. Natural gas has “a special case because for now, it acts as a bridge towards our path to more renewables.” Here one more brick to protect the gas market.

· On 31st of December 2021, the EC proposed to amend the EU Taxonomy with a complementary Delegated Act covering nuclear and gas activities.

In the middle of a gas price crisis, the European Commission continues to protect gas markets at the expense of renewable heat and energy efficiency. We need more competition and fair competition between gas and renewables to supply affordable heat to all consumers. The main issues that national and European policy makers must now focus on are:

These are the foundations for moving the EU’s energy system towards high efficiency and low cost for the benefit of households, businesses, and industry. The next 2 years will be pivotal as there is little time to waste in the energy transition.

See you in the summer to check the progress of Europe makes.