Offenburg, 25th February 2016 – Exergy was announced today as the winner of the European Geothermal Innovation Award 2016 during the opening session of GeoTHERM exhibition and Congress in Offenbourg, Germany. The award was given for the 2-pressure-level cycle on a single-disk turbine demonstrated in Denizli Tosunlar geothermal plant, Turkey.

Exergy won against strong completion from the four other endorsed nominees:

EGEC president Dr Burkhard Sanner said “The winner, Exergy, and the closest runner-up, Turboden, are both active in the field of electric power production from low-temperature geothermal sources. In a power market influenced more and more by variable renewables like wind and sun, the dependability and flexibility of geothermal power is badly needed” adding “the improvements in efficiency and flexibility achieved will directly increase the chances for geothermal projects to become economically viable in a changing market environment”

Collecting the award, Anthony Hinde, International Marketing and Sales Director at Exergy said “Exergy is delighted to be the Winner of the European Geothermal Innovation Award 2016, recognising the efforts of the whole team in designing and the implementing the world’s first 2-pressure level ORC cycle on a single turbine.
This unique Organic Rankine Cycle turbine has opened up the possibilities for previously uneconomic projects to be commercially viable, by greatly increasing the efficiency possible in small, low enthalpy geothermal power plants. Our first 2-pressure unit has been in operation for almost one year and the performances have surpassed expectations and relevant guarantees.
Exergy had previously been a finalist for this award in 2014, and are now delighted to be taking home the first prize. The repeat nomination reflects Exergy’s constant innovation, where our dynamic team is always seeking new solutions. We are currently working on a number of further innovations and look forward to being back in 2017 to show Europe and the world how the Organic Rankine Cycle market can continue to evolve increasing efficiency in an economically viable way.”

The European Innovation Award, now in its third year, is an initiative of the European Geothermal Energy Council and Messe Offenbourg. The award is given to companies that have made an outstanding contribution towards the field of geothermal energy in the form of innovative products, scientific research or project initiatives. 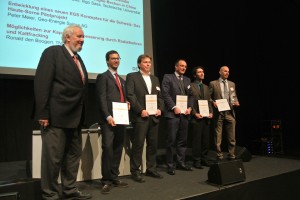