The Winner of the European Geothermal Innovation Award 2014 is BESTEC

Collecting the award, Jörg Baumgärtner said “we as a company are proud to be involved in the continuation of the European success of the EGS technology developed a Soultz, which depended on the contribution of experts from several countries. Knowledge we gained there was developed further at Landau and Insheim”

Baumgärtner thanked and praised the BESTEC team, who he described as “a dynamic crew, always ready to deeply engage in new projects.”

Burkhard Sanner said that “BESTEC have been instrumental in bringing a concept which had been researched and discussed for a very long time, into practically demonstrated and commercially viable installations.”

He thanked the finalists- the endorsed nominees- saying “these four companies showcase the innovation power that exists within all fields of geothermal energy.” He added “I look forward to reviewing many more excellent nominations for next year’s award”.

The four endorsed nominations for the European Geothermal Innovation Award 2014 were, in alphabetical order:

Designed as an opportunity for industry peers to acknowledge excellence, and for the most exciting ideas to be widely publicised, the European Geothermal Innovation Award is the seal of excellence applied to the most intelligent and important ideas in research and industry which will play a key role in the future development of geothermal energy. 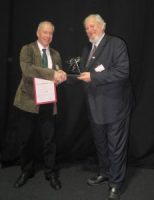